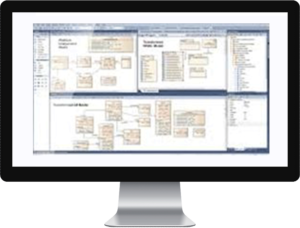 “Model-Driven Data Access” (MDDA) is a software development environment. Starting with a data model, with the help of MDDA database schemes, interfaces, XML formats and display elements can be generated. MDDA is offered with Eclipse and Java.

MDDA substantially reduces the development time of databases and associated interfaces and enables the client to focus its own developments on its core skills.

Software development, especially in the database field, has for several years increasingly focussed on explicit data models and generated interfaces. Software firms that have merged in the OMG (Object Modelling Group) have for a long time given precedence to a standardized approach, which they refer to as MDA (Model-Driven architecture).

ECOFIN has followed this development from an early stage and has been developing software based on this principle since early 2000 onwards. Over time a software development environment has evolved with which database schemes, interfaces, XML formats and display elements have been generated based on a data model.

The software has proven its worth in ECOFIN internal and external database projects. 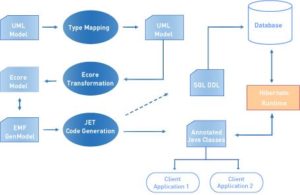 MDDA WITH ECLIPSE AND JAVA

Code generation for Java is based on a UML model. Java Application Programming Interfaces (APIs) are generated in several stages, in which the general UML model is firstly transferred by conversion into a Java programming model, which then serves as the starting point for generation of Java code.

The plug-ins for model conversion and code generation are embedded in the Eclipse development environment. They utilise standard Eclipse tools, in particular the UML2 interfaces and the Eclipse Modelling Framework (EMF). The Java code generated does not use EMF libraries any more. Hibernate is used as the persistence layer.

With division of generation into different transformation processes, intermediate results can be used again. The entire process then becomes considerably more flexible. The individual transformation steps are configurable and can be adapted or exchanged as required by the client or for special project requirements.

This website uses cookies so that we can provide you with the best user experience possible. Cookie information is stored in your browser and performs functions such as recognising you when you return to our website and helping our team to understand which sections of the website you find most interesting and useful.

Strictly Necessary Cookie should be enabled at all times so that we can save your preferences for cookie settings.

If you disable this cookie, we will not be able to save your preferences. This means that every time you visit this website you will need to enable or disable cookies again.